Views from The Sudbury 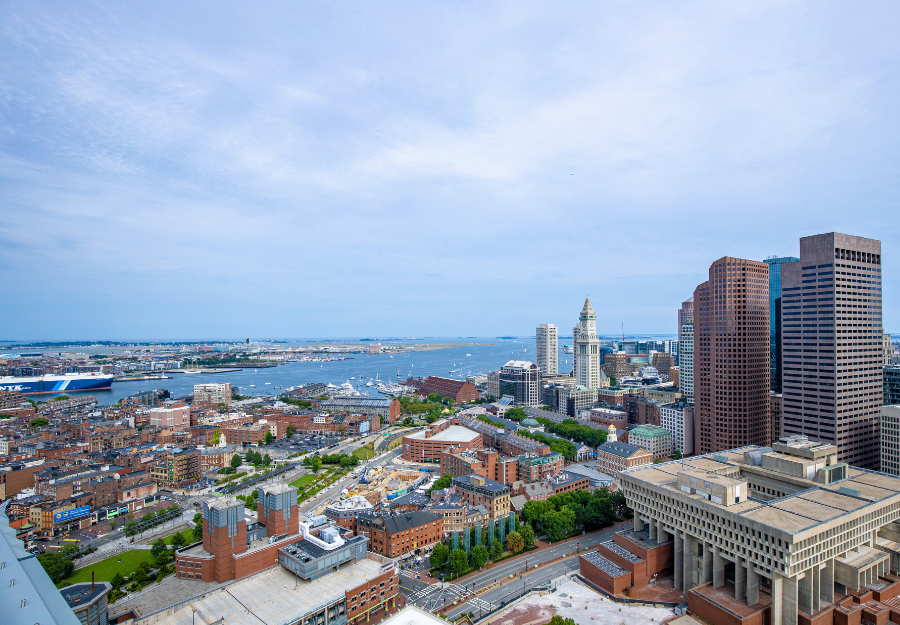 Soaring at 480’ and 45 stories high is the newest Downtown Boston apartment building, The Sudbury. Home to 368 apartments ranging from studios to 3 bedrooms, this luxury oasis makes city dwelling a dream. The Sudbury is also home to 55 premiere condominiums that boast astounding views and exquisite finishes, all set to the backdrop of the Boston skyline.

Life here has given the notable quote “a picture is worth a thousand words” a run for its money. With ethereal views from one of Boston’s highest points, you can revel in the beauty of all the noteworthy landmarks our city has to offer. From all the popular things to do in Downtown Boston to being surrounded by the best Downtown Boston restaurants, here are our seven favorite landmarks to see around The Sudbury.

Built in 1915 and standing at 496’ tall is Boston’s first skyscraper, The Custom House Tower. This historic building has stood tall for over a century in Boston’s Financial District’s McKinley Square. It’s hard to imagine that at one point, it was considered one of the tallest buildings in the entire world. If you’ve lounged on the Rose Kennedy Greenway or taken a stroll towards the waterfront, you’ve likely noticed this landmark towering in the background. You can get an even better view from the 32nd floor Sky Deck.

Another magnificent sight from 480’ in the sky is the large bodies of water engulfing Boston. If you’re someone who can’t get enough of ocean blue waters, sail boats, and regattas, you’ve finally found your favorite seat for water-watching. From the Sky Deck you can see the Atlantic Ocean and the Boston Harbor to the North-East and the Charles River to the South-West. The best part? They are also within walking distance. Visit any of these destinations and enjoy a great day of boating or an evening stroll to catch the salty breeze.

Illuminating Kenmore Square and Fenway Park, the 60×60’ Citgo sign is perhaps the most recognizable landmark in Boston. Located South from The Sudbury, this beacon of Boston has been a central part of our city’s culture since 1940. In 2018, the Boston Landmarks Commission voted unanimously to designate the sign as an official landmark. Given its location atop the Boston University bookstore at 660 Beacon Street, the BU community is especially fond of this landmark and have embedded it in their collegiate character.

Whether hosting games or sold-out concerts, TD Garden is one of the most popular Boston landmarks ”evah”. Located less than a half a mile West from The Sudbury, the home of the Boston Celtics and Boston Bruins is New England’s largest sporting and entertainment arena. The newest addition to the Garden is The Hub on Causeway, a go-to spot for The Sudbury residents featuring Star Market, Starbucks, Guy Fieri’s Tequila Cocina, Banners Kitchen & Tap, Big Night Live, and more. Though life at the Garden looks different during the pandemic, this neighborhood staple is still a popular destination for both residents and out-of-towners alike.

The Zakim Bridge, also referred to as “Lenny” by Bostonians (named after Leonard P. Zakim), carries 10 lanes of traffic into and out of the city, making it one of the widest cable-stayed bridges in the world. For those looking to head north on a weekend excursion, 1-93 North is only a stone’s throw away — meaning less time driving through the city and more time at your destination. The Zakim is the scenic backsplash for the west-facing Boston Pop Fireworks over the Charles River, which future residents of The Sudbury are certain to enjoy from the Sky Deck. Lighting up the city and getting us from point A to B, we don’t know what we’d do without this bridge.

We’ve only scratched the surface of historical landmarks and destinations that can be viewed from The Sudbury. Invite your friends over and play a game of Where’s Waldo: The Sudbury edition and discover all the gems the city has to offer from the convenience of your home. Share your photos on social media and use the hashtag #ViewsFromTheSudbury and tag us at @TheSudburyBoston so we can share your image!